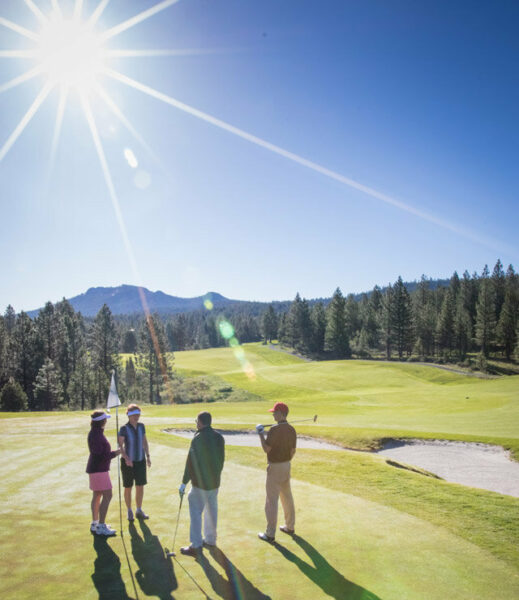 Nakoma Resort’s 18-hole course is mountain golf at its best.

“Taming” the Dragon, Nakoma Resort’s championship Northern California golf course, is no easy feat. That’s about to change. Thanks to extensive enhancements to an already-stellar Robin Nelson design, golfers from across the region will soon get an in-depth look at the new-and-improved Dragon. The 18-hole marvel, known for its challenging albeit stunning landscape, is undergoing expansive alterations, all of which are bound to turn heads as spring gives way to summer’s surge of golfers. Tactical enhancements, such as select tree removal,  softening greens, and bunker modifications, allow novice and advanced golfers alike to enjoy the sprawling beauty of the Lost Sierra and master this once-daunting course.

While the Dragon has remained a mainstay in the Northern California golf scene since its first round, it’s been an ambition of ours for some time to improve the playability for all levels. Over the span of several months, we’ve made various enhancements to all but five holes. To enhance the Dragon, we first needed to gather input from a wide range of individuals, including designers, the grounds team, and, of course, you — golfers.  As stated above, this included strategic tree removal. We also removed select bunkers, relocated tees, reworked fairways, expanded greens, spliced in some approaches, and improved irrigation. At the end of the day, the Dragon still prevails as a premier, award-winning Northern California golf course. However, it now has the unique ability to entice golfers of all ages and skill levels.

The Dragon has never been more vulnerable. Now is the time to confront and master this undeniably breathtaking Northern California golf course with your family and friends. Recent enhancements certainly haven’t taken away the natural beauty of Nelson’s original design. In fact, the thinning of trees opens up several holes, providing stop-you-in-your-tracks views of the Lost Sierra and mountain peaks. As Golf Magazine so eloquently put it, the Dragon is known for its “curves, swerves, climbs, and drops at every turn.” And the grounds crew works tirelessly to ensure that the quality of the tees, fairways, and greens match the beauty of the landscape.

A Prominent California Golf Course and a World-Class Resort

The Lodge at Nakoma is a 42-room hotel.

Combine two or three rounds of championship golf with a stay at one of the most sophisticated luxury resorts in Northern California: Nakoma Resort. Nakoma is Plumas County’s crown jewel; it’s equal parts mountain-modern lodge, award-winning golf, culinary experience, and rejuvenating spa. While the lodge itself is an escape, there is also an endless landscape nearby that appeals to mountain bikers, hikers, fly fishers, photographers, and those who value the revitalizing powers of the Lost Sierra’s digital detox.

No comments so far.